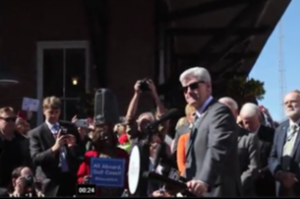 BY PAUL HAMPTON jphampton@sunherald.com
GULFPORT — Retired teacher Jackie Bond last rode a passenger train when she was a teenager. “I came from Kansas City to New Orleans on the Kansas City Southern,” said the Gulfport native who lives in Pass Christian and still tutors. “I was 17 and scared to death.”

Now, as she waited for the Amtrak Inspection Tour to roll into Gulfport, its second stop on a two-day trip designed to gauge interest in restoring Amtrak service along the northern Gulf, she was ready to go again. “I have the Amtrak brochure and it has so many trips,” she said. “So many places we can go in the United States as well as Canada.”

By the time the train pulled into the Gulfport station 10 minutes later, the Gulfport High School band and cheerleaders had the rest of the crowd just as wound up. 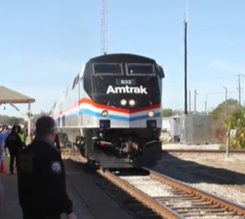 “It’s just another piece of the puzzle,” Mayor Billy Hewes told the cheering crowd, “of our offerings here, the amenities that we have that make us so rich, with so much opportunity not just here in Gulfport by across the entire Gulf Coast. “Let’s have Amtrak be a regular stop along this route.”

Gov. Phil Bryant, as Hewes noted, is one of the biggest cheerleaders. “You ready to get on board?” Bryant asked the crowd. “It’s a great day in Gulfport and all across the Mississippi Gulf Coast.” Bryant said Amtrak could bring more people to visit our tourist destinations. “We need to bring them from all over the United States and all over the world because when they get here, they’ll love it,” he said. “Each time (someone new) comes, they say, ‘We had no idea how beautiful this Gulf Coast is.’ “Now we’re going to get them here. We’re going to get them on board.”

U.S. Sen. Roger Wicker, who Thursday announced a working group to study ways to get Amtrak back on track along the Coast, said he’s been waiting for the train a while, too. “Ever since I was a little boy growing up in Pontotoc, Mississippi,” he said. “I wanted to get in a locomotive and drive a train. When this train pulled into Gulfport, I was in that locomotive. I thought I brought it in pretty smooth.”

And so it went until Hancock Bank President John Hairston finished up the Gulfport program, saying all the superlatives had been used. The others, he noted, had said it all. “So let me thank the community for showing up,” he said. “It shows a lot of community spirit, which is indicative of the types of people who live and reside here.” And he finished by leading the cheerleaders in one final cheer.”Give me an A,” it began. And the crowd obviously knew the rest: M-T-R-A-K. 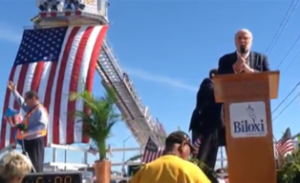 BILOXI — Small children too young to ever have seen an Amtrak train in South Mississippi and old folks who remember riding the train to visit relatives or attend the New Orleans World’s Fair cheered when the first Amtrak train in 10 years rolled down the tracks Thursday.

The train stopped briefly for speeches in Bay St. Louis, Gulfport, Biloxi and Pascagoula. In other areas, people waved as it passed, showing their support to the politicians, train officials and reporters on board.

Cathy Jasinski had a seat near the tracks in Biloxi, where bands from area schools played, cheerleaders danced and the Second Liners paraded from the train to the stage. Jasinski rode the Hummingbird train years ago and then took the Amtrak to visit family before passenger rail service ended. “I would ride it again absolutely,” she said. “I’d go to New Orleans and back, and I’ve got family in Houston.”

The mix of people in the crowd — military folks from Keesler Air Force Base, casino employees, tourists and tourism officials, kids in conductor caps — showed how many segments of the local population might ride the train to Disney, to New Orleans or beyond. The proposal is to offer passenger service from Jacksonville, Fla., to New Orleans, but prospective passengers realize it would connect them to places well beyond the Gulf Coast.

Catherine Moody of Biloxi has to go into New Orleans now to board the train for the trip to her former home in Seattle. “You’re looking a people’s backyards for 3 1/2 days,” she said. But the Amtrak superliners are very comfortable, she said. Despite the longer trip, she always takes a train instead of flying, and she wants to get on board in Biloxi.