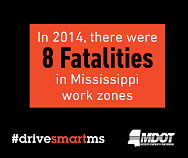 Mississippi drivers urged to use caution in highway work zones

The theme this year, “Don’t Be That Driver”, which will focus on the important role the driver plays in work zone safety as well as other road safety issues.

MDOT is reminding drivers it is imperative they are acutely alert.  A driver distracted by an activity other than driving, such as using a cell phone or eating, is up to four times more likely to be involved in a crash. MDOT also says recent years have shown an increase in work zone related fatalities and injuries, many of which were a result of distracted driving.