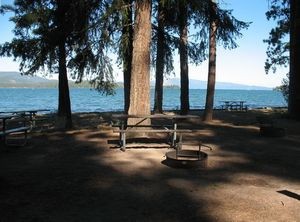 When people on bicycles show up at a Montana state park looking for a campsite, they’re always accommodated, according to Tom Reilly, assistant administrator for the agency that oversees the parks.

After all, it’s not like campground managers have to squeeze in an extra Winnebago.

But this summer, bicycling campers will find areas constructed specifically for them at four western Montana state parks – Whitefish Lake, Wayfarers in Bigfork, and Placid Lake and Salmon Lake near Seeley Lake.

Reilly says the improvements will help Montana cater to a growing trend in the tourism industry. Ginny Sullivan agrees.

“We’re just thrilled to see the state step up and help nourish this niche,” said Sullivan, the director of travel initiatives at the Missoula-based Adventure Cycling Association. “One of the things that is very positive about bicycle tourism is that, while general tourism marketing focuses on our two national parks, bicycle tourism hits all corners of the state and all our little towns.”

This summer, state campgrounds at Whitefish Lake, Wayfarers, Placid Lake and Salmon Lake will offer shared group bicycle sites with room for as many as 10 tents.

With no vehicles or RVs to park, it’s not that hard to find the room, Reilly said. Bicyclists also tend to spend just one night in a campground before pedaling off toward another, he noted.

Whitefish Lake State Park already had an area dedicated to non-motorized campers, and it will be improved. Reilly said the sites at the other three parks will be new.

The sites will be available to anyone arriving by non-motorized means, be they bicyclists, hikers or people in kayaks or canoes.

Reilly said the bidding process for the project is just getting started. Construction is scheduled to begin this spring and the sites should be ready by late May or early June.

“But we’re pushing for May,” Reilly said. The project is being funded with $200,000 from the Montana Department of Commerce.

Montana State Parks received 70 comments on the project during the public comment period between Dec. 31 and Feb. 5, and all were positive. The agency issued a notice of decision this week, adding that it had been determined that the proposed action “would have no significant effects on the human or physical environment,” and therefore, an environmental impact state was not needed to proceed.

A 2013 study by the University of Montana’s Institute for Tourism and Recreation Research helped get the ball rolling, according to Sullivan.

“It was one of the instigators for state parks wanting to do more,” she said. “They saw the economic benefits.”

The biggest concerns of the respondents were the absence of, or lack of adequate, shoulders on many of the state’s highways, route safety and campgrounds.

“I wish that parks would reserve (as does Oregon) some spots for biker/hikers,” one person wrote. “We frequently ride most of the day and cannot be ‘first come.’”

Another complained of “a woeful lack of reasonably priced places to stay overnight. Even campgrounds can be expensive.”

While Missoula drew the most overnight bicycle tourists, more bicyclists had spent nights in small towns such as Wisdom, Ennis and Eureka than did ones who stayed in Billings, Bozeman, Great Falls or Butte.

“Economically, small-town communities could see considerable gains from drawing in touring cyclists to their community,” the study stated.

Sullivan said the U.S. Forest Service has expressed an interest in providing camping spaces for bicyclists in some of its area campgrounds, and is hopeful the four-park project at Montana State Parks is just the start of something bigger.

The Institute for Tourism and Recreation Research study concluded it could pay off economically.

“With a few considerations, Montana has the potential to become a premier cycling destination,” the study stated. “The diversity of landscapes provides for different and exciting riding conditions in all regions.”