Congress calls on stakeholders to make case for Amtrak return 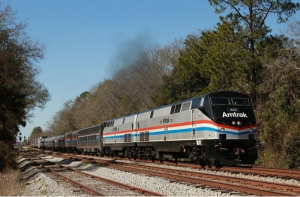 Article Authored by LEAH BINKOVITZ | Special to The News

John Spain spends a lot of time on trains.

Just last month, the rail advocate took Amtrak’s Crescent line from New Orleans to Birmingham, Ala., for a meeting. But if he wanted to take the rail farther east to Biloxi, Miss., or even to Jacksonville, he could not.

Those communities used to be served by Amtrak’s Sunset Limited line. Its rails were severely damaged by Hurricane Katrina in 2005. They eventually were rebuilt but the service was never fully restored.

Now, Congress has called on stakeholders to determine whether a new proposal to bring back Amtrak service in the booming region could succeed. Officials in favor of the project argue it is critical to the economic development of the area and would connect thousands of people to jobs, education and tourist attractions.

Amtrak’s proposed service would serve almost 154,000 passengers at a cost of $9.5 million annually, according to projections from Amtrak and the Southern Rail Commission, a regional organization that’s pushing for passenger rail expansion in the South.

And it would connect military bases, academic institutions like Florida State University and tourist attractions like New Orleans’ Mardi Gras festivities and casinos. It would also connect the workforce in a booming region, argues Spain, the commission’s vice chairman.

The region is one of the fastest growing areas of the country. From 1960 to 2008, the population in counties along the coast increased 150 percent, more than double the rate of the national population during that period, according to the U.S. Census Bureau.

“Even though I’ve lived in this part of the world all my life,” Spain said, “I didn’t truly appreciate a Mobile-New Orleans connection.”

The Gulf Coast’s economy relies not only on tourism, but also on petrochemical, construction and other sectors that have corporate offices in New Orleans and facilities across the region.

“You have shipyards along the coast,” Spain said. “You have welders, you have pipefitters and people who are professionally trained.”

Local officials along the potential route, which would run from New Orleans to Orlando, rode the rail in February to assess the infrastructure and drum up support for their cause.

The project already has several officials on board, including New Orleans Mayor Mitch Landrieu, who helped kick off that ride and Mississippi Sen. Roger Wicker, who helped pass the legislation that created and funded the working group.

“It’s critical to the continued development of the coast,” Spain said.

The area had passenger rail as early as 1984, when Amtrak established the temporary Gulf Coast Limited between Mobile and New Orleans for that year’s World’s Fair. The service returned for a year in 1996, joining the Sunset Limited that had been extended across the Gulf Coast in 1993.

Page 2 of 3 – By the time Hurricane Katrina struck, the Sunset Limited’s days already were numbered. Between 2000 and 2004, the number of Gulf Coast trips went from 53,256 to just 37,375, according to Amtrak, with ridership along the ebtire line on a downward trend since 1994 even as Amtrak’s overall numbers went up.

“It was a problematic service,” Spain said.

The line only ran three days per week, and passengers who rode it — which originated in Los Angeles and stopped in dozens of cities including, Tucson, San Antonio and Houston — encountered frequent delays.

“There were times when the train would be four or five hours late,” Spain said.

By the time Katrina hit, service had been cut to two days a week because of track work that predated the storm. Katrina devastated the rail infrastructure, and although freight carrier CSX rebuilt it, Spain said, there was little enthusiasm for the Sunset Limited to return.

But the lack of passenger service remained a topic of conversation. In 2008, Congress passed the Passenger Rail Investment and Improvement Act.

New federal requirements forced states to secure funding for stand-alone routes shorter than 750 miles, and the Southern Rail Commission thought it might be time to examine a return to service with new routes.

Together, Amtrak and the commission came up with a recommendation: instead of using the trains that come in from Los Angeles, Amtrak could rely on the much more consistent City of New Orleans cars originating in Chicago. Under that proposal, passengers could then take an overnight train from New Orleans all the way to Florida with stops including Gulfport, Mobile, Tallahassee, Jacksonville and Orlando. And instead of three days a week, the service would be offered five days a week.

The recommendation also includes a separate daily train between New Orleans and Mobile that could cater to local riders.

“Any reason someone would be on I-10 is a reason you would be on this train,” said Magliari, who argued that rail provides a more comfortable alternative to driving, a cheaper option than flying and allows people to work and socialize while they get to their destination.

Magliari also offered rail as a better option than expanding a highway that cuts through the area’s wetlands.

“(Using) an existing rail corridor to move people is more efficient and has proven to create transportation-oriented development opportunities than adding lanes to I-10 can’t do at nearly the same cost point,” he said.

Building over wetlands makes highway expansion even much more expensive, he argued.

Page 3 of 3 – But Amtrak might face an uphill battle in advancing that argument. Expanding I-10 has won plenty of support in the past, including in Houston, where $2.8 billion was put into expanding the freeway. And in the South, vast numbers of people aren’t exactly clamoring to give up the convenience of cars.

With nine months allotted by Congress, it’s up to the working group of stakeholders to fill in the details and establish support. States would be responsible for one-time improvements and the operation of the New Orleans-Mobile line.

Testing the waters last month, the inspection ride brought out a strong show of support from communities along the line, Spain said.

He expects a recommendation from the task force by the end of the summer and hopes he will be able to take the train east for meetings in the future.

“I’d ride any time I could,” Spain said.

Featured Photo by Photo by Roger Durfee of the Amtrak Inspection Train seen shortly after leaving Bill Lee Station in Chipley in February.