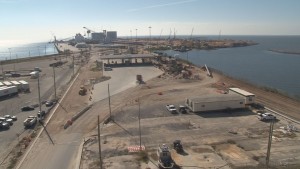 It’s a boost for the South Mississippi military community and the Port of Gulfport. Port leaders announced on Thursday the Department of Defense has granted strategic seaport designation to Gulfport.

The Port of Gulfport has pursued the designation for more than two years. It means Gulfport is now one of just 17 ports nationwide that will handle the shipment of military cargo and equipment.

“In support of the deployment of U.S. armed forces assets in the event of war, contingency or other national emergency or disaster,” said port director Jonathan Daniels as he read from a letter at the Port Authority board meeting Thursday morning.

The Department of Defense designation follows a lengthy review process in which military leaders looked at the capacity and capabilities of the port.

Although it does not include any military or federal funding, the shipment of military goods will bring benefits.

“Our longshoremen, the truckers, all of them are going to be able to take advantage of that. It adds more hours. More hours ultimately adds more employment opportunities. So, we’re extremely excited,” said Daniels.

In the past, military shipments to and from the Seabee base in Gulfport would often go through ports in Texas, while the base is less than two miles away from the Port of Gulfport. That designation will change that.

“The object is not just to keep your bases open, it’s to improve and increase their mission, and this can’t do anything but help. That secures jobs in the future. So, very well done,” said Commissioner Jim Simpson.

Quick access to the railroads and Interstate 10 were also among the benefits which helped Gulfport achieve strategic port designation.

The closest strategic ports to Gulfport, are Jacksonville, FL, to the east, and Port Arthur, TX, to the west.