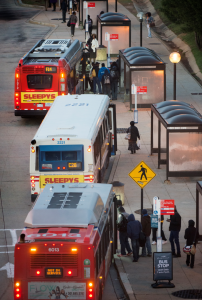 By Faiz Siddiqui March 19, 2016
In the labyrinth of bus routes, rail lines and commuter arteries that make up a city map, identifying areas that lack sufficient services can be difficult.

But a new U.S. Transportation Department initiative would help pinpoint these “transit deserts.” Then, planners say, urban and suburban pockets with substandard train and bus service — or those lacking any transit — could be better connected to a city’s grid.

“ ‘Transit desert’ is a very simple way of saying, ‘Let’s look at where and how much service we provide versus what the potential [is],’ ” said Andrew Owen, director of the University of Minnesota’s Accessibility Observatory.

“Even in a place like Kansas, if you look at the transit system in a small city there — yes, there is some transit — now we have an opportunity to map out where and how the transit service is compared to other things,” he said.

Under the initiative, planners would use the information to help persuade policymakers to improve public transportation in underserved communities. And in some cases, years of painstaking research on how transit can better serve cities could be reduced to mere months.

That’s the goal of the National Transit Map, a nationwide effort to cull data from transit agencies into a comprehensive feed for anyone to use.

A one-stop shop for transit wonks, if you will.

For example, a software developer could morph the code into a real-life map; a researcher could compare transit access in Omaha to that in Richmond; or a transit agency could weigh whether its bus timetables sync with other systems in its region.

Several Washington-area transit agencies, including Metro, MARC and VRE, have expressed interest in joining the project. A spokesman for the Fairfax Connector bus system said the service is “excited to participate.”

All the agencies have readily available the necessary data sets, called “GTFS feeds.” And coders say little is required of those agencies participating.

GTFS is the same format that was originally developed to deliver schedule information to Google’s transit apps, the same data that shows up on your smartphone when you’re trying to figure out how long you’ll have to wait for the next subway train. (The ‘G’ originally stood for Google, but the acronym is now General Transit Feed Specification.)

In the eyes of planners, the simplified data set is more than just a commuting tool; it’s a critical component of the nation’s infrastructure.

Daniel Morgan, chief data officer for the Transportation Department, calls the map “a snapshot of transit service in America at a point in time.” Almost like a transportation census.

And, he says, it could have important implications for the country’s most transit-starved areas. He says it’s a simple map with temporal dimension: stops, routes and schedule information.

For example, on paper, a neighborhood might appear in a bustling section of a city. That doesn’t tell you anything about whether its residents are well served by the city’s bus system. For example, if they do have service, is it frequent enough to serve their needs?

“The question is: How well is our system taking people to where they need to go?” said Carlos Monje, acting undersecretary for policy at the Transportation Department. “The data is good not only for individual users, but for people who are trying to hold their system accountable.”

Developers say the initiative is a long-overdue addition to the country’s transit infrastructure.

“Data is the fundamental currency that’s driving our transportation system and will drive our transportation system going forward,” said Kevin Webb, a longtime software engineer and now entrepreneur-in-residence at Google-backed Sidewalk Labs, an urban-innovation company. “Really, we’ve been focused on infrastructure, and that’s not where the future is going to be. In a lot of places, we’ve really overbuilt the roads. We’re going to figure out ways to better optimize and utilize the systems we have.”

Adie Tomer, a fellow with the Brookings Institution Metropolitan Policy Program, could have used the aid of a National Transit Map seven years ago, when he was conducting his study, “Where the Jobs Are: Employer Access to Labor by Transit.” The research, conducted with a team of researchers and released in 2012, found that more than three-fourths of all jobs in the country’s 100 largest metropolitan areas are in neighborhoods with transit service.

And it presented a striking dichotomy: Both the San Jose and Richmond metropolitan areas offer transit service to more than 97 percent of city jobs, but transit access to the suburbs represented a huge disparity.

In San Jose, whose transit routes extend well past the core of the city, 84 percent of suburban jobs are accessible via transit. In Richmond, however, the number is only 29 percent.

The implications of the study were vast, influencing conversations among planners and researchers about how metro areas should be constructed and how transit should be mapped out to best suit communities. Tomer says jurisdictions used Brookings’s statistics or created their own versions of the study to serve as performance benchmarks.

But another important legacy of the project may be the map itself.

The study required three years of research, including data gathering and manually inputting data sets submitted by transit companies via paper records. In Tomer’s office, he said, sits a box of paper schedules collecting dust, from places such as Omaha and Milford, Conn., which did not have digital transit schedules at the time.

Tomer says Brookings recommended that the federal government begin aggregating GTFS-like data at the conclusion of its research. No lobbying was conducted — it was a simple recommendation, a selfish one.

A National Transit Map could have shaved 12 months off his three-year project.

“There’s no euphemism for the permanent back pain that I have for sitting in a chair from so long coding,” Tomer said.

“It’s really easy to understand where roads go, how fast they travel and where they connect,” he said. “You know, transit’s a different beast. To better understand how regional economies function on kind of a daily basis, there needed to be an elegant way to kind of understand transit. For folks outside of transit agencies and their peers at metropolitan transit agencies, what this does is incredible.”

The Transportation Department will begin collecting data from transit agencies on March 31. It expects to put out the first National Transit Map this summer.

Faiz Siddiqui is a metro reporter covering transportation and local issues. He has previously contributed to NPR, The Boston Globe and the Arkansas Democrat-Gazette.