MythBusters wanted to know whether the traditional American four-way stop is better than the UK roundabout when it comes to the flow of traffic. The answer may surprise some drivers if they’ve never tried both.

Score another victory for traffic engineers who support wider adoption of free-flowing roundabouts at U.S. intersections.

“Mythbusters” has staged what just might be the ultimate transportation-geek showdown: An American four-way stop vs. an uncontrolled one-lane European roundabout.

Roundabouts are becoming more common in Portland (tragedy has given rise to plans for one in Forest Grove), but they’re far from mainstream.

But as I wrote in a 2009 column, the Wanker’s Corner roundabout at the juncture of Stafford and Borland roads in Clackamas County shows the benefits of removing traffic signals in favor of allowing a little chaos.

Uncertainty now breeds caution and mostly free-flowing traffic in what was once a congested crossroads.

Also, in roundabouts, crashes tend to be slower and involve rear-end collisions, versus more deadly side collisions typical at traditional intersections.

On “Mythbusters,” stars Jamie Hyneman and Adam Savage tested “the myth” that roundabouts are a triumph of efficiency in fighting traffic congestion.

It wasn’t even close to being busted.

So, the roundabout actually improved traffic flow by 20 percent, according to the test runs.

I can think of at least 10 intersections in the greater Portland area, including a few on Southwest Scholls Ferry Road and along the Beaverton-Hillsdale Highway, that are begging for a roundabout.

Watch the video for yourself: 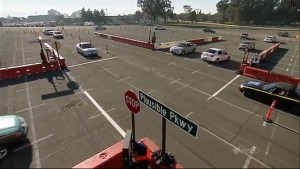