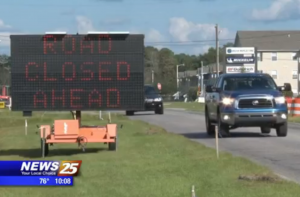 Construction is finally rolling on a project that has been in the works for nearly ten years now. News 25’s Shelby Myers shows us what residents are saying about the plan to widen a congested and dangerously busy two lane road in Biloxi. Click to view the video coverage
Pulling onto Popp’s Ferry Road from his apartment complex is a daily nightmare for Biloxi resident Damien Battles. “When I pull out, I’m waiting out there for about 10 to 15 minutes before I can even pull out to the road.”
That’s because Popp’s Ferry is currently a busy road jammed full of motorists. But the weekend will bring on phase four of construction to turn this dangerous two lane road into a four lane boulevard.
Between Cedar Lake and Lamey Street, a small section of Popp’s Ferry will close, forcing travelers to detour. This is a small price to pay for those looking forward to future improvements. “Construction, I know, is not going to be like it is in east Biloxi. That’s even worse than what is here, so we’ll manage. It’s a small community here. Just a few scattered neighborhoods around here. Like I said, it’s ultimately going to pay off in the long run,” said resident Joshua Bullock.
Planning Director for the Gulf Regional Planning Commission David Taylor believes it’s going to pay off in the long run as well. After nearly ten years, the commission worked closely with MDOT and has paid out nearly $7 million for the project. “It’s going to take some of the traffic off of I-10. Probably create a little less congestion on some of the other streets as well, so it’s going to be a good thing for the city,” said Taylor.
This project will be a good thing for the city, for motorists and for pedestrians. Every day residents at a nearby apartment complex walk up and down Popp’s Ferry Road and it’s a huge inconvenience. “I’m scared she’s going to get hit by a car. We’re from grass to the dirt, from grass to the dirt, so a walkway would be a lot better,” said Christina Hayes.
Along with the road widening, Christina Hayes’ wish for a sidewalk will also be granted.”The south side of the roadway, there’s going to be a ten foot multi-use pad for bicyclists and pedestrians,” said Taylor.
The Popp’s Ferry Road widening project is expected to be completed in a year.

2015 WXXV-TV and Morris Networks of MS